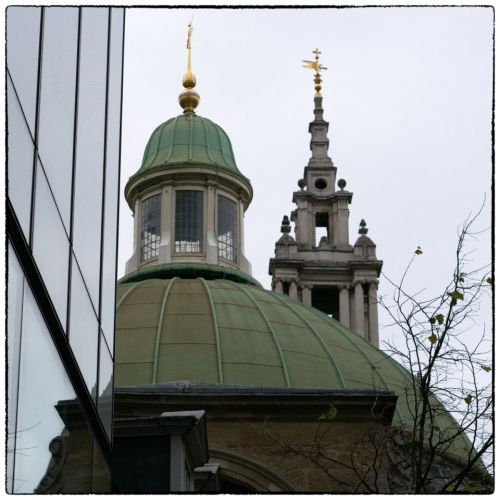 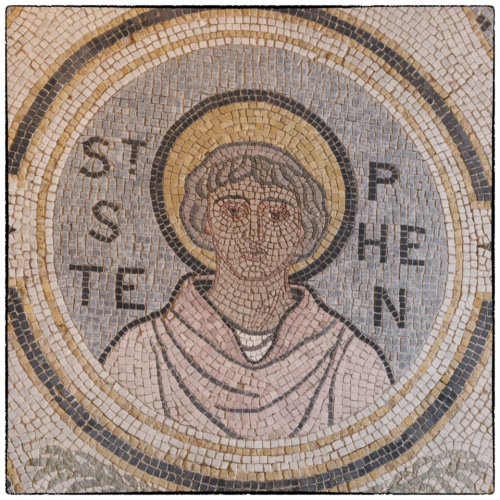 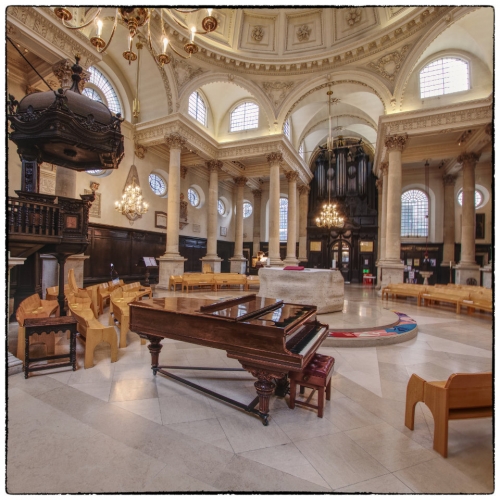 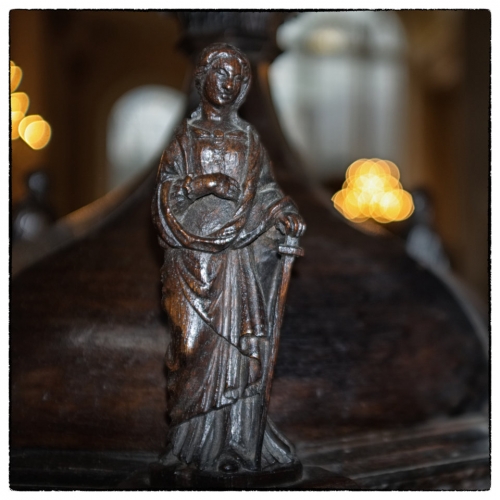 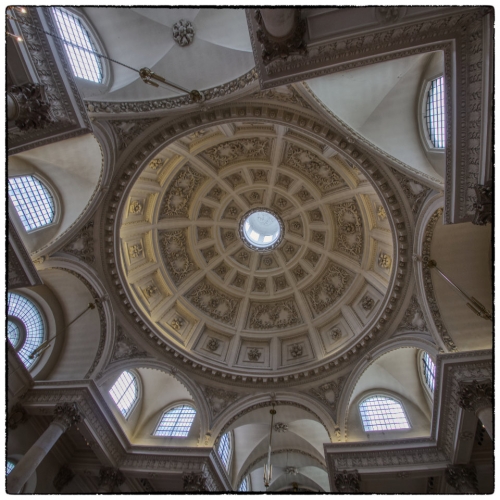 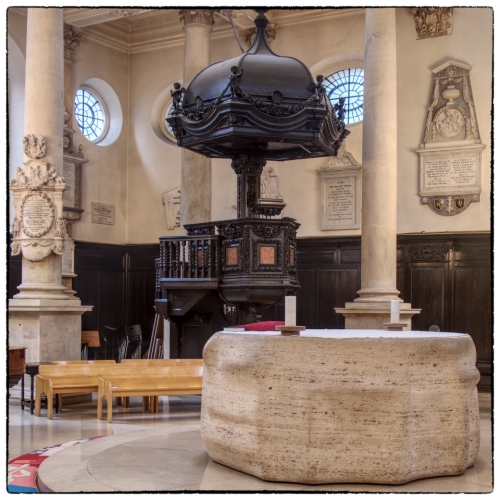 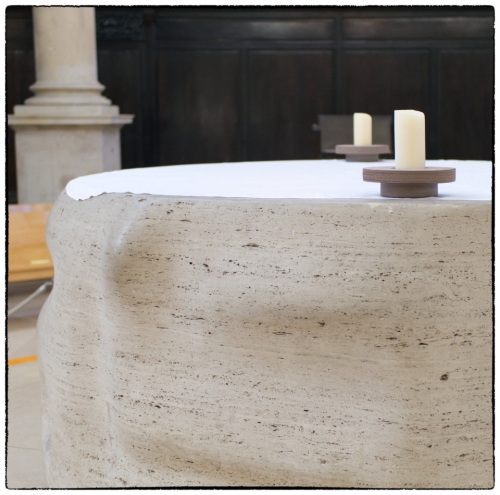 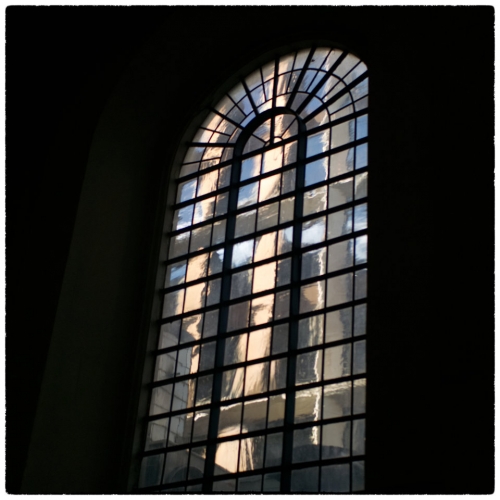 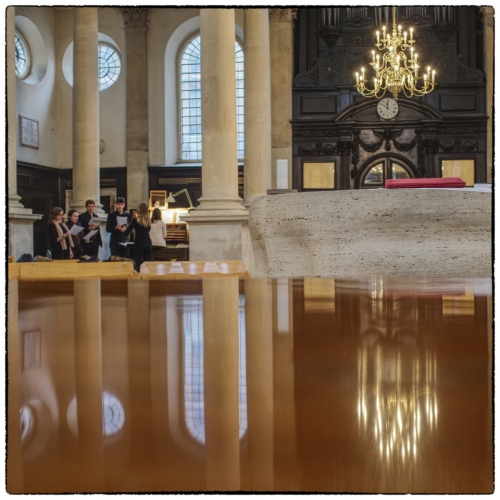 Introduction
During the first assignment, I had an idea for this one of photographing church congregations as they left on Sunday mornings, thus illustrating the interesting variety of local religious establishments, but this was abandoned after the first run on discovering that they leave gradually rather than en masse (I was also concerned that some might be suspicious or disapproving of being photographed). Staying with a religious theme, I decided to photograph a church, St Stephen Walbrook. My approach changed over the seven visits I made. My first intention was to concentrate on the technical requirements and, “test out combinations of focal length, aperture and viewpoint” (Bloomfield, 2017, p.52); later I favoured documenting the church as though for a booklet, taking my lead from an unillustrated A4 handout (Meyer, n.d.); by the end I had combined the two, being subject-driven but always conscious of the brief.
To set the context, this is a small church of unconventional layout, conveniently near to Cannon Street station. Designed by Christopher Wren after the Fire of London, it includes a dome said to be his “trial run” for St Paul’s and is now surrounded by modern office blocks. It contains a massive 8-ton (approximately) circular marble altar by Henry Moore.

Description
For the brief, there are focal lengths from (35mm equivalent) 16mm to 106mm; apertures from f/1.7 to f/8; (and, incidentally, shutter speeds from 1/2000 to 0.3 sec); a variety of viewpoints has been used, but the dome exterior from above proved impossible. As regards “[using] the exercises from Part Two as a starting point” (Bloomfield, 2017, p.52), there is little lens distortion. There are examples of shallow depth of field, particularly fig. 5 where this was the specific goal and most of the images have appropriate depth of field with middle- and background detail, but there is no image with a foreground subject at f/22 and hyperfocal focusing because no such image made the final cut.
In terms of processing, I experienced a late epiphany, attending a volunteers’ briefing session for ArtUK’s sculpture photography project on 27th November. They specify submissions in RAW with minimal processing (straighten and correct clipping) and I reprocessed all my chosen images, working from RAW, in the last three days before submission. There are some extremes of dynamic range for the indoor shots that required bracketing, but the amount of post-processing has diminished significantly.

Evaluation
I believe the set makes a creditable effort of illustrating the main features of the church while being visually interesting and exploring the characteristics of the lenses available.
The most difficult shot was the general interior view (fig. 4) trying to illustrate that the building is (more-or-less) square, is broken up by the large, intrusive pillars that support the dome, and is dominated by the massive, central Henry Moore altar.
The dome interior was impossible to accommodate until I bought a new lens, whereupon this (fig. 6) and the general interior became far easier to achieve without image stitching. Overexposure of the central cupola was always a problem.
I was disappointed not to get an exterior shot of the dome from above. The church is surrounded by office blocks but none would allow me access to an upper floor window and the church tower is too unsafe to allow access.
Perhaps the most important shot is fig. 7 which shows the finest piece in the building, the Moore altar and also (in the background) the enormous and spectacularly ugly dark-wood pulpit. The altar inevitably appears in many of the interior shots and its colour variation between images has been noted but not addressed successfully.
Figs. 9 and 10 were serendipitous: the nearby Bloomberg building “staining” the plain glass window and the reflections on the lid of a grand piano which was only in place for one of the visits.
The mosaic of St. Stephen (fig. 3) is a mundane subject and inconveniently located in the entry stairwell but is an important church artefact.
Both exterior shots can be improved when the leaves have fallen off the trees.
The images taken and the selection process are discussed in some detail on the web site (Blackburn, 2018a).

Part Two
There is nothing in particular to refer to from Part 2, but any comments and advice would be welcome. My response to the course text and exercises are on the web site (Blackburn, 2018b), making a rather long and unwieldy web page. I am separating the course text and the exercises for Part 3 to improve the navigation.

Reflection
This will be in greater detail on the web site to meet the word count limits for this document.
Technical Skills – I feel that I have used the equipment reasonably well to illustrate my subject. I am not aware of anything I set out to show that has failed on technical grounds. The major learning point for this exercise was that whereas I previously have just photographed what is easily accessible and available and ignored the rest, here I consciously tried to show “all” of the church and in doing so had to make compromises because the subjects are fixed, the background always cluttered and the interior lighting always difficult (mostly dark with intrusive highlights). My late change of working method has been noted.
Quality – The coherence of the set is inherent in the subject and so, unlike the first assignment, this largely takes care of itself. I struggled with deciding the order in which to show the photographs. The contact sheets are shown on the web site (Blackburn, 2018c).
Creativity – I do not regard the set as particularly creative aesthetically, but as my intention was essentially functional and documentary, this is not a particular failure.
Context – I do not really understand this component yet and note that it is presented later on in this course and more particularly in Year 2.

Questions on referencing:
1. Bloomfield – how should “Copyright OCA 2014; Updated 2017” be shown?
2. Is the use of “ibid.” allowed? There is no mention of it in the OCA guide and the cited Coventry U. system excludes it. I assume therefore that it is not allowed.