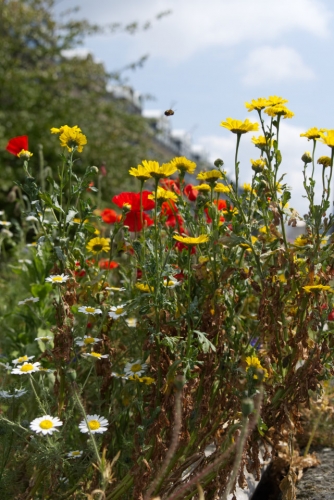 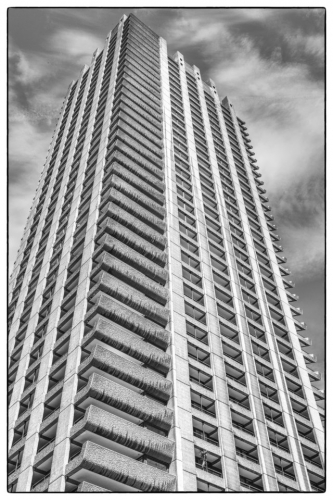 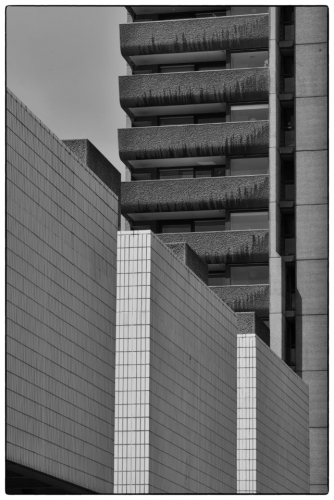 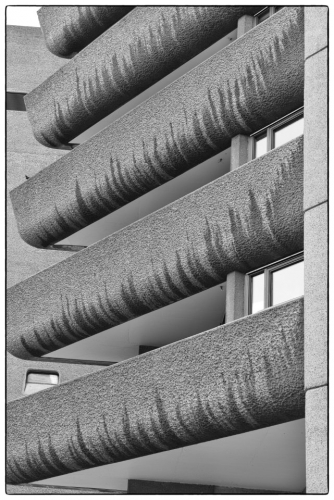 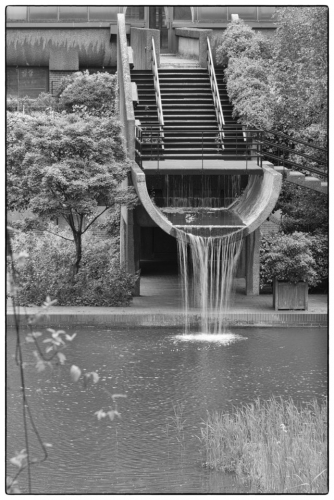 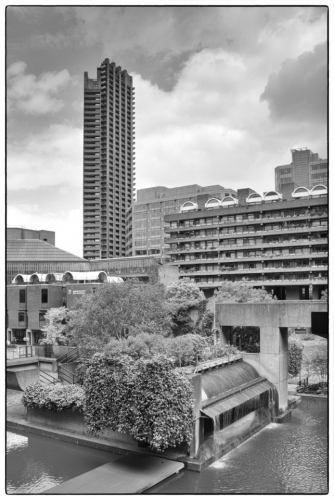 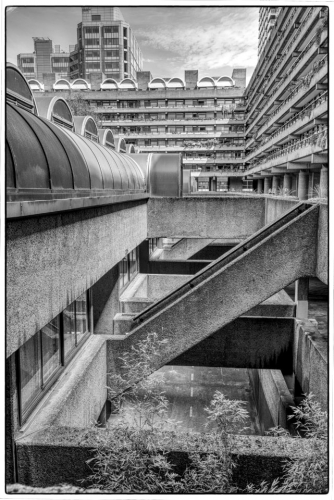 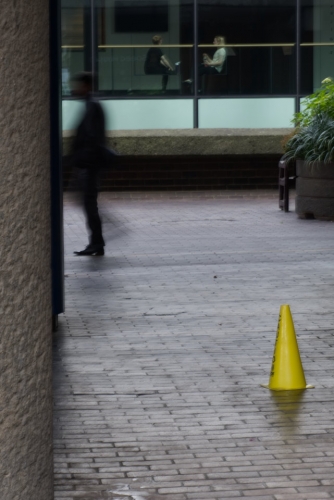 Two subjects were pursued for this assignment, one large and one small. In reading the course material, I admired the architectural photography of Michael Schmidt both his use of “neutral diffused” light and the photographing of medium-sized details rather than entire entities. Secondly, I greatly enjoyed experimenting with tabletop lighting setups for Exercise 4.4 and wished to take this further.

The Schmidt images shown in the article linked to the course material (Thoughts About My Way of Working, 1979) led me to think of The Barbican as a subject and, following a guided tour on 17th March, returned to photograph the area . For tabletop photography, I conceived the idea of using a single spotlight to create harsh shadows, using small objects chosen from charity shops specifically for their shadow potential.

The assignment is being submitted on paper, comprising this text and six photographs. Links are provided in the references to the contact sheets, to my full notes on the image selection process and to the blog in which the assignment is mentioned.

Schmidt’s article deals with subjectivity in photography: black and white images remove the distraction of colour and renders viewers’ reactions more objective; this is reinforced by diffused light and the avoidance of harsh shadows “or other mood effects”. Schmidt thus influenced my choice of subject matter and tonality. Having learned from the first assignment the advantages of a consistent format, I shot in vertical orientation: this decision was encouraged by seeing Egle Kisieliute’s work at Photo London 2019, fig. 1.

Schmidt has produced numerous series of photographs through books and exhibitions. The books are prohibitively expensive and so I visited the V&A to examine those available. These comprised Waffenruhe (Ceasefire, 1985–1987), U-ni-ty (1991–1994) and fotografien seit 1965. The books changed nothing in my intentions for the project; there were similar architectural images to those already seen through this course scattered throughout Schmidt’s work, but they mostly concentrated on series comprising portraits, domestic scenes and recycled halftone newspaper images.

I practice, the light was variable on the first visit and harsh on the second, but as Schmidt’s article observed, “the photographer has no influence on the evolution of the negative”, in this case, the natural light available on the days of shooting. I strayed, in most cases, from my original intention of shooting building details.

As can be seen from the contact sheets, I took 102 images on the first visit and 147 on the second, although this does include some bracketing in an effort to enhance a bland sky. The image selection process is documented in some detail on the web site.

The six share some characteristics: the subject is The Barbican and they were shot in monochrome and in vertical format. As Schmidt observed, monochrome is less distracting for the viewer and I also find that it helps me to concentrate on the subject when taking the photographs. By contrast, the front cover for my assignment submission is a bed of flowers in colour with Barbican balcony flats defocussed in the background (and a fortuitous bee). Looking at the chosen photographs individually,

Image 1 was taken late in the second visit as I was packing to leave and was included in the set as an afterthought. Though a cliché, it does set the scene as a standard Barbican image with which the others can contrast. I have avoided looking books and articles on Barbican architecture until now to avoid influence and look forward to comparing my work after the assignment has been submitted. The Barbican publicity machine did email me the advertisement shown in fig. 2 on 20th June.

Image 2 gives a medium distance view of the distinctive curved concrete balconies, contrasted with the square, tiled surfaces of utility structures. I prevaricated over switching the project to colour on this and nearby shots. Again, these deliberations are documented online.

Image 3 the last of the balcony shots in relative closeup and looking rather like fingers with a lone pigeon to interrupt the pattern.

Image 4 as may be seen from the contact sheet evaluation, to took many pictures of the fountain from various angles and prevaricated over which to choose, eventually opting for an early straightforward shot

Image 5 an even greater time was spent photographing, editing and choosing a shot of the rear of the fountain.

Image 6 the last photograph, reshot on the second visit, combines two aspects from the first to show the other Barbican balcony type and also a reminder of the necessary infrastructure with the car park and roadway and surprising foliage.

[Fig. 3, although noted in the evaluation process as the most distinctive image taken on the project. It was removed as it does not complement the others: if I had ordered a monochrome print, it might have been included.]

The technical details are as follows,

As regards the assessment criteria:

Technically, the images are successful. I find working with Fuji equipment more intuitive than my previous kit. I have learned to use bracketing only where it may be useful (using one of the Fuji monochrome filter settings might have achieved the sky enhancement but I have not yet experimented with these).

Quality: I do not regret choosing this project (and am still in the process of finishing the secondary project, Shadows). I stated at the start of the course that I intended to explore architectural photography and I feel that this is a reasonable start. The quality of the prints from DS Colour Labs is good

Creativity: I still cannot lay claim to a personal voice, though Shadows (albeit rather frivolous) has some potential for originality †. A great deal of time was spent in selecting the photographs, though there has been little editing of individual images, most of which are shown full frame.

Context: although deriving initial impetus from Schmidt, the set diverges from the original intention of photographing details. The choice of monochrome and vertical format has, I believe, enhanced coherence.

† This accompanying text was written on 25th June. After completing the first draft, I shot a quick session of Shadows and a Photoshop Elements collage of a selection of the images is shown as fig. 4.